The Real Meaning Behind Songs 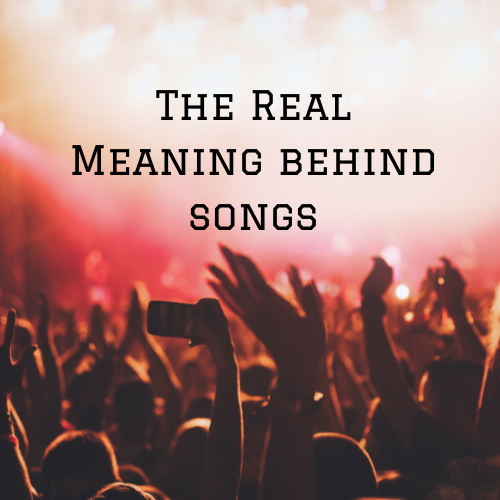 Music can show many things: pain, love, depression, guilt, and an overall story. Though many songs have obvious meanings, some do not. My favorite kind of song is when I really have to dig for the meaning. Most of the music I listen to has a level of “pain” that you have to relate to in order to understand.

This song has a special place in my heart, as I know NF has helped a lot of teens through hard times. A very important lyric is: “Broken legs but I chase perfection, these walls are my blank expression.” It gives a clear image of someone wanting to be something they aren’t. Chasing perfection while your legs are broken holds the meaning of having a broken heart and mind but still actively changing yourself. NF tells his life story through every lyric he writes, he tries to give teens something to relate to so they know that they aren’t alone.

Multiple meanings could be taken into consideration with this song, it all depends on the trauma and life experiences you have. Every word in the lyrics shows something. Bulimia: “I need to purge my urges..” It’s describing how some people feel the need to quite literally purge their urges. Religious Trauma: “…teeth are yellow… would you like me better if they were white like yours?” The comparison between yellow and white teeth is there to show how some religions want you to be a perfect picture. This can cause a lot of trauma and lead to other things. Addiction: “I need an alibi to justify, somebody to blame.” People who are under the influence of drugs tend to blame things on how they feel. When you are addicted to something you spend all of your time with that thing and need alibis. It can mean more than those three things but it is all up to you and how you interpret it.

Cigarette Daydreams by Cage the Elephant

Cigarette Daydreams is an upbeat song with dark meaning. It’s pretty hard to truly figure out what it means but certain lyrics help. Matt Shultz, the lead vocalist of the band has talked about suicide and depression many times in interviews. This whole song is about the suicide of a teenage girl and how it can affect someone. “Looking for the answer. If you can find a reason, a reason to stay.” The specific part “reason to stay” of the lyric, is the most important. “Did you stand there all alone?.” The words show the loneliness of the teenage girl and how he noticed but didn’t say anything.

Apocalypse by Cigarettes After Sex

The whole song is about lost love and how she got away. “You leapt from crumbling bridges,” is the first lyric of the song. It means that he jumped out of a destroyed relationship. “Sharing all your secrets with each other since you were kids,” shows that the two have known each other for a while and that the love isn’t new. One of my favorite lyrics is “Filming helicopters crashing in the ocean from way above,” filming helicopters is implying that people found out about the relationship and that’s when everything went to the gutters. There is a lot of imagery in the song and it is an overall 10/10.