Chess takes a new turn with this Netflix original series. 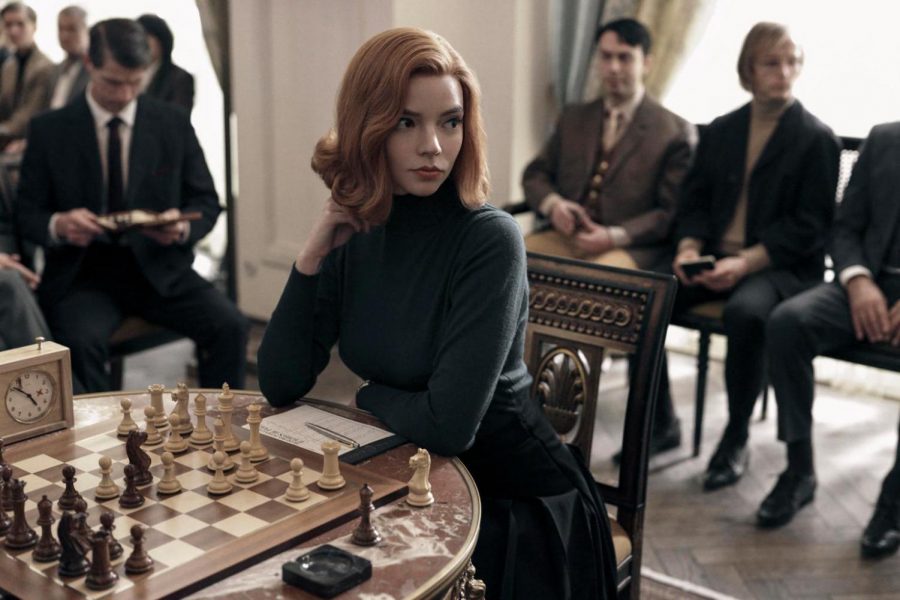 Anya Taylor-Joy stars as 'Beth Harmon' in "The Queen's Gambit".

A common misconception is that chess is boring. However, “The Queen’s Gambit” is anything but boring.

“The Queen’s Gambit” focuses on chess player Beth Harmon and her struggles with addiction. The show takes place in the 1950s and 1960s during the Cold War era. After being orphaned at age eight, Beth is sent to an orphanage where she meets William Shaibel and Jolene. Jolene teaches Beth the ins and outs of being an orphan and trying to get adopted.

One day after she finishes her test, her teacher tells her to go clean chalkboard erasers down in the basement. In the basement, she sees Mr. Shaibel, the school custodian, playing chess by himself. Beth immediately becomes intrigued with the game and wants to learn how to play. Mr. Shaibel is hesitant at first but eventually teaches Beth how to play. Beth then gets adopted by the Wheatly’s, an unhappy couple, and moves into their home, leaving Jolene and Mr. Shaibel behind.

After divorcing her husband, Alma Wheatly becomes hugely interested in Beth’s talents. Years pass and the mother-daughter duo travels the world to tournament after tournament. At one of her chess tournaments, Beth meets Benny Watts, a world-wide chess champion. Heartbreak from a close loss sends Beth into a spiral and the two grow close. Benny helps Beth prepare for her last match of the show, the 1968 Moscow Invitational Chess Tournament, against Vasily Borgov.

Netflix just recently released “Creating The Queen’s Gambit” which shows the behind the scenes of the show and added commentary/interviews. Scott Frank, writer/director of “The Queen’s Gambit”, describes Beth as her own antagonist because she is so self-destructive yet so brilliant. Beth is trying to make her way as a female chess player in a male-dominated world. At the beginning of her career, Beth struggled with being taken seriously but towards the end, she was treated with respect and was even feared by other players.

“The Queen’s Gambit” is such a phenomenal and complex show that it’s hard to do it justice in just one article. It brings representation to important issues such as addiction, depression, anxiety, domestic abuse, and more. Definitely the best show of the year!