Since the Sandy Hook Elementary school shooting in 2012 there have been nearly 300 school shootings in the United States at an average of almost one shooting per week. Since January 1st, 2018 there have been 19 shootings on school campuses, with 25 fatalities and numerous injuries . One of the more recent mass school shootings occurred on February 14, 2018 at Marjory Stoneman Douglas High School in Parkland, Fl., when a 19 year old former student opened fire after setting off a fire alarm, killing 17 and injuring many.

School shootings have become a nationwide epidemic infecting elementary schools, middle schools,high schools, and college campuses nationally. In Los Angeles, California a 12 year-old brought a loaded gun to school and accidentally discharged the weapon, shooting two of her 15 year-old classmates. At a high school in Benton, Kentucky a 15 year-old student opened fire on school grounds killing 2 students and injuring 18 others. In Italy, Texas a 16 year-old boy opened fire in the school cafeteria targeting his ex-girlfriend. Those aren’t even the majority of the school shootings that have occurred this year. 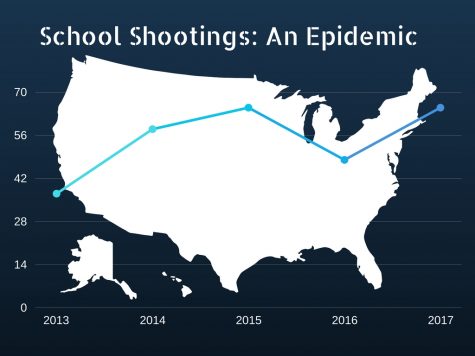 Students across the nation have taken a renewed interests in campus security following the Marjory Stoneman Douglas High School shooting. Most students including many students here at West share the same worry about a possible shooting occurring at their school.

“When I first heard about the Marjory Stoneman Douglas shooting I was taken aback because of how many people were killed in the shooting and also just how everything went down and the strategy behind the shooter’s intent.” said Deiona Stanley, “At first I wasn’t worried about something like that happening here, but once they started enforcing different codes here like the doors being locked I started taking into account where cameras were, how the doors were locked and how it affected everyone in the trailers. After really thinking about it yes I am concerned. We don’t really go through crisis prevention here besides tornado and fire drills. We should take into account if a shooter were to be active and the protocol for the students and staff”

The overwhelming prevalence of school shootings following the Sandy Hook elementary school shooting of 2012 and the recent mass shooting at Marjory Stoneman Douglas has caused an increase in school security across the country. Here at West we have policies in place to prevent tragedies like the ones that have occurred at other schools across the nation from happening here.

“All our classroom doors are supposed to be locked and closed at all times .” said Ms.Wagoner “ We’re not supposed to let any visitors on campus without having them check in and go through the front office. We’ve been having all the exterior doors to the school locked. So if students are outside the vicinity of the school they have to have a key card to get in or they have to go to the front and be buzzed in. If there were to be a shooter there are certain codes that will be said over the intercom that will inform us what’s going on, at which point the lights will be turned off. Students are supposed to be moved from the view of the windows in such case the shooter is outside and out of the view of the door if the shooter was inside.”