At a high school in New Jersey, a teacher caught two teens smoking in a bathroom. The teacher ordered one of the teens to open her purse. Later on, the teacher found out that the student was selling marijuana. The juvenile case argued that the student did not have the right of the 4th amendment. The T.L.O case was later on sent to the Supreme Court. This case denied the right of the fourth amendment for students in school today.

“If we walk by, smell marijuana or see anything in the car that we know is illegal, at that point we can search the vehicle,” said Deputy Simpson, SRO.

The Tinker vs. Des Moines case also questioned the rights in school. The students in Des Moines planned a silent protest. They planned to wear black armbands to protest against the Vietnam war. The principal found out about the rally and said anyone who wore the armbands would be suspended. This case went to the Supreme Court and also defined the right to the 1st amendment is allowed to a certain extent. 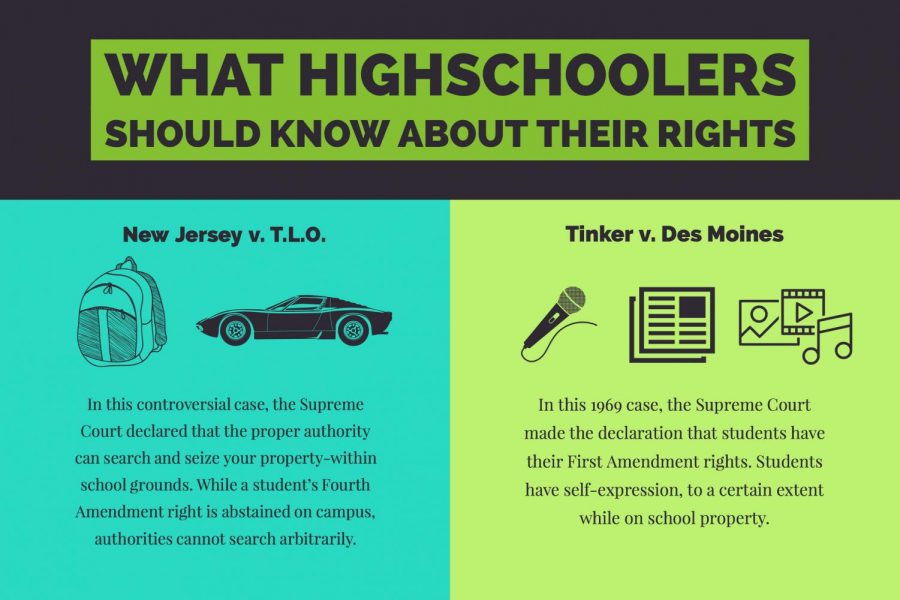 The Hazelwood School District vs Kuhlmeier trial was another case that defined the rights of freedom in schools. The journalism class of Hazelwood East High School went to the U.S district court when they thought they were being stripped of the right to freedom of speech. The journalism class wrote a few stories that the school’s principal thought was inappropriate. Since the student journalist had no time to change the article, the principal scratched the whole page altogether.

These cases established a massive controversy on rights in school. Today, many people are still discussing what the future needs to be for public school’s rights.

“While we are school we have certain rights that are taken from us, that is just how it is,” said Angela Arevalo, editor in chief of print media for the West Wind. “However, we are still humans, and the whole point of the our class is to speak the truth when nobody else will. In order for us to do our jobs as journalist we have to be willing to spread the news, even if it it is controversial .”