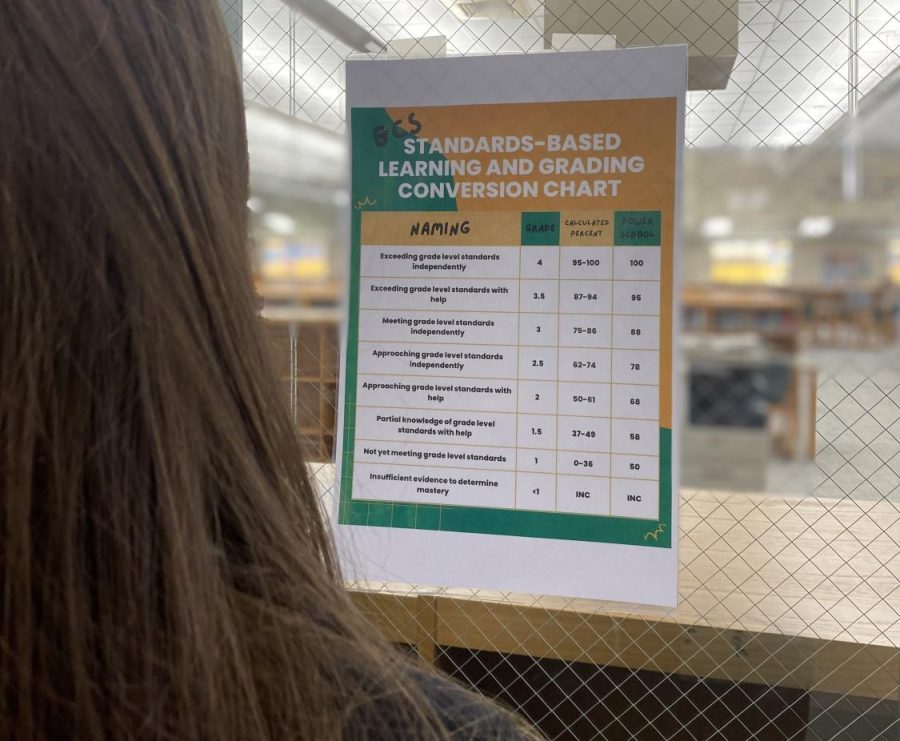 As students transition into the first completely normal school year in almost three years, they were introduced to a completely new grading system: Standards-Based Grading. Brunswick County Schools intended to use a four-point grading scale that would encourage students to focus on learning the material, rather than focusing on the grade. But due to the short notice and fast rollout of the policy, many students’ parents were misguided on its purpose and benefits. The number of complaints has led to a pause for this school year, but the rollout is expected to resume for the following school year.

“With traditional grading, the focus is on the actual grade where with Standard-Based Grading you won’t be able to see a grade: you will see your standards and your proficiency,” said math teacher, Jennifer Johnson. “It’s changing the focus from grades to learning.”

The purpose of standard-based learning is to gear students’ attention to perfecting a standard so that they can fully learn and comprehend the subject. Most students are in a common practice of getting the “perfect grade,” whether they learn the material or not. Students have been trained to work on a “pass or fail” mindset and Standard-Based Grading is hoping to eliminate that.

“So instead of asking the teacher what your grade is, you could ask them how you can do better in one specific skill, like essays or equations,” said Johnson. ‘“We think students are motivated by grades, and the Standard-Based Grading is supposed to shift that back to learning.”

Students will be graded off of each standard, moreso than actual assignments. A student will receive a 1 for a standard grade if they have not learned the skill and will receive a 4 if the student has perfected the standard and is ready to move on. Numbers 2 and 3 show progress towards standard proficiency and proficiency, respectively.

“It is more accurate because it is smaller, making it more qualitative rather than quantitative,” said Johnson. “We’re not grading on effort anymore; it’s truly about learning the standards.”

While the scale may be more accurate, it will be more challenging as well. For students to receive a 4 in a certain standard, they must completely master that subject with no issue. That is similar to making a 90 or higher.

“I think it’s more rigorous because in order to make a level 4, you really have to show level 4 work,” said Johnson. “To make an A, you’re really gonna have to have that excellent, superior knowledge of the skill versus someone who just does all of their work to get a 100.”

Although Standards-Based Grading is designed to reflect a student’s understanding more accurately, some students are concerned that these grades may affect their college applications since colleges don’t use this scale for student grades. Johnson assures students that although this is a change, this could actually benefit students who do plan to attend college.

“When you get to college, a lot of classes don’t check homework or classwork grades, they only care about assessments,” said Johnson. “We think it will prepare them for the future.”

Standards-Based Grading plans to gradually warm students up to the 1 through 4 scale and eventually merge them to only receive assessment grades rather than assignment grades. Assignment grades are intended for practice in order to learn and grow so students shouldn’t be graded on practice. Assessments are to show what a student has learned and should be the only grades they receive.

“Eventually that 30% artifact is gonna fade away and 100% of the student’s grade will be assessments,” said Johnson. “I think it’s a lot more fair because there are kids that don’t have parents or caregivers to support them in their coursework.”

The concept is also a drastic change for parents. The traditional grading scale has been used over 100 years which can make it difficult for parents to understand. Many parents are unfamiliar with Standards-Based Grading since they have never been exposed to it, making them uncomfortable with the change.

“It is how teachers were graded, how parents were graded: it’s all they’ve really ever known,” said Johnson.  “I think a lack of understanding will be hard for parents, and they will be angry or upset, but once they understand that the focus is on learning and that we have the students’ best interest at heart, they will come around.”

Although the subject is difficult for some parents to process due to the sudden change, the overall goal is to benefit the students and their ability to learn. Johnson has confidence in its ability to succeed and hopes that both students and parents will give the grading policy a chance.

“I hope everyone will give it a chance,” said Johnson. “Students are more flexible; parents are probably gonna be the least just because they don’t understand, and they love their kid and want them to do good.”

Although many students are not fond of the change, some students understand and are even grateful for the shift. Senior, Lauren Nelson, appreciated the new scale while it was in place since she has focused a lot of her time on getting the perfect grade. Nelson agrees that students tend to gear more attention toward the number rather than the instruction.

“I think we’re too focused on our grades,” said Nelson. “I feel like I haven’t actually learned in forever.”

Donate to The West Wind
$100
$500
Contributed
Our Goal
Submitting donation...

Thank you for your donation!